I read a lot. But I rarely listen to audio books – mostly because my home and office are in the same neighborhood, and when I do travel in town, I’m usually on a scooter. Hardly an optimal environment for listening. Nevertheless, I walk a couple of miles each day, and I’ve started to take the time on some of these walks to listen to podcasts, and sometimes, a book. 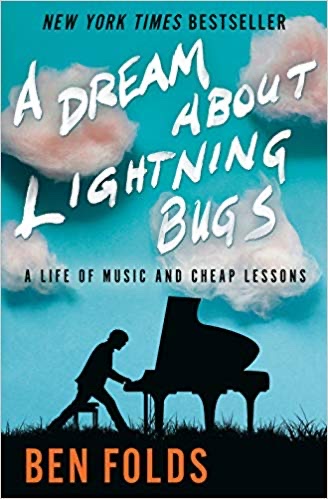 My wife, Nanette, noted that Ben Folds, the musician and songwriter, has a new book out. I found the audio version on Scribd. And I was amazed. Anyone who knows even a little bit about Ben Folds knows that he is an exceptional piano player, a songwriter with a wonderfully weird sensibility, a guy who has always been wildly creative. But who knew this guy could write? Not only that: he narrates his book in this audio version, and I can’t imagine a better narrator.

In the course of reading the book, I discovered Ben and I have a few things in common. He moved a lot as a kid. (I had moved nearly a dozen times by the time I had graduated from high school.) He characterizes himself as a hard, obsessive worker who lacks discipline. (Check.) He says that as a child he subjected his parents and his brother to his obsessions – which turned out to be mostly related to piano and drums. (My obsessions and my main instruments were a bit different, but similarly intense: first animals, then science, art, and the guitar.)

I won’t spoil the rest of the story. If you’re a Ben Folds fan, a musician, a songwriter or a student of creativity and innovation, I highly recommend this book.

A daily selection of the best content published on WordPress, collected for you by humans who love to read.

The best longform stories on the web

The latest news on WordPress.com and the WordPress community.